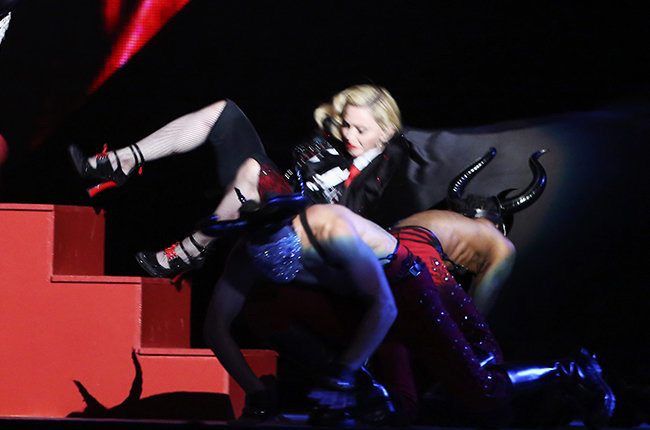 Madonna and her now infamous plunge this week got everyone in the office wondering the same thing: why has Madonna’s gaffe gotten loads more media coverage than anything else having to do with the Brit Awards – including the winners?

After a bit of a discussion, we concluded that media simply love a bit of drama and unexpected controversy. This isn’t new news, though. We know this because we’re all blessed with seeing Kanye West and Kim Kardashian’s faces in print and online on a near daily basis.

What makes the Brit Awards different is that it in itself is an extremely newsworthy event and a PR generator that all of the nominees and winners were likely banking on to provide a bit of a boost for their own publicity.

Instead, after a quick search on various websites for ‘Brit Awards’, we found that all of the top-of-the-page articles included Madonna’s fall in the headline – and when we clicked to read the stories, text about the fall was at the top and the winners were way down at the bottom of the page.

Yes, Madonna’s fall was part of the Brit Awards, but it was a five-second blip of a two hour long event, yet it got the majority of the headlines in the end – as well as several follow-up stories about her cape being tied too tight and experiencing a bit of whiplash, which have kept her name in the headlines in the run up to her new album’s release.

So what can we learn from this blunder? It’s that it doesn’t matter if you lose the competition, or even if you take a bad step or say the wrong thing. You can still ‘win’ if your mishap helps you stand out from the crowd at an event.

**Lava does not condone or take responsibility for injuries acquired as a result of trying to make your presence known at an event.