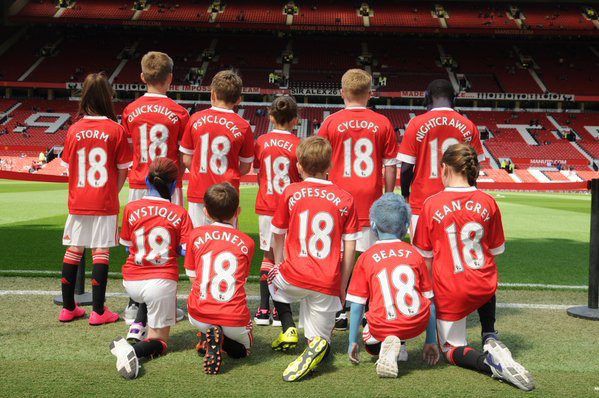 At the beginning of the week, all the talk about Manchester United focused on their cancelled game against Bournemouth.

The team’s many sponsors will understand the media attention on the discovery of a suspicious package within Old Trafford but quite a few people will be disappointed that their promotional plans didn’t come off. Take 20th Century Fox for example, which signed a partnership agreement with United at the beginning of the year. The film distributor’s promotional team had come up with a great photo-opportunity to promote its latest film: X-Men: Apocalypse.

Eleven young mascots were due to lead the two teams out in front of a packed Old Trafford crowd. Rather than wearing the names of their favourite players on the back of the famous Red Devil’s shirt, the mascots would be sporting the name of one of the X-Men as they formed a superhuman team to welcome the teams to the pitch.

Obviously, with the media rightly focusing on the decision to abandon the game and United’s press office and social media team keeping people updated on developments, the photo-opportunity never made it.

So, what can you do if your best laid plans are scuppered by larger, breaking news? In the case of promoting United’s partnership with Universal and the new X-Men movie, their publicists promoted the stunt before it was staged.

Having professional photography of the mascots taken ahead of the game, allowed Manchester United to promote the stunt before it was staged for real in front of a sell-out 73,635 crowd. Far more people than that actually had chance to read about the stunt before the game, with Manchester United tweeting pictures to its 7.6 million followers before the game. At the time of writing, the pic of the mascots had been retweeted 2,200 times and had received the same number of likes. A further 499,000 people were reached when United’s Tweet was Retweeted by @XmenMovies.

The story and images were also placed on the club’s website, giving the story even more visibility.

So, what else can you do if the media don’t attend your event?

Video: television news need good quality footage. Do you or someone you know own a HD video camera and tripod? Could you get a minute of footage – a mix of scenes from the event as well as an interview with someone talking eloquently and succinctly about the event? If so, do it. Talk to the news desk after the event and see if they’d like to receive your footage. If they don’t, then at least you’ve captured the event and can create your own video for use on your website and YouTube channel.

Repeat the event: A lot of hard work goes into organising an event and it’s not always possible to stage the photo-opportunity on another day, but if you can, and the media want to cover it, then there’s nothing stopping you having another go. If you can’t repeat the event but there was interest from the media beforehand, then maybe you can tweak your event and take it to the media – so they don’t have to come to you. A photo-opportunity outside their building or in their office might make things easier for them to cover.

Think carefully about when to stage your event. Talk to the media beforehand and make sure there’s nothing else clashing the diary. Make sure they have enough journalists and photographers working at the time of your event. If they don’t – move your event to time and date when they do.

Think ahead from the beginning: Nothing is ever guaranteed – a larger news story could always break and scupper your plans, so think ahead from the beginning. How can we increase our chances of getting our event covered? What can we do to make people aware of our publicity stunt or event? This is exactly what happened with the X-Men: Apocalypse mascots at Old Trafford. Having photos of the mascots taken before they appeared in front of the crowd made sure the PR team had something to show for their efforts.

previousOlympic-fever is coming: Are you ready to go for gold?

nextMaking the most of your words: What Twitter's recent announcement means to your business